After 8 months of inactivity, I shall return to write in my blog. I apologize for my absence, but I was completely focused in my university studies. I hope I can post at least two new entries next December.

But while that happens, I just wanted to share some fantastic news that happened this year:
My "Hobbit" movie review, which I wrote almost a year ago, was published in Mallorn, the Tolkien Society's Journal this May 2013.

Mallorn 54 had a section dedicated exclusively for movie reviews, so I sent my review and gladfully it was accepted. I even received a physical copy of the journal because I was a contributor ^^. I must thank Henry Gee, the editor of Mallorn, for accepting my review and for sending me a copy.

My name in the Tolkien's Society Journal? I am truly speechless, it's definitely a dream that became true. I hope this is not the last time a piece of writing of mine is published in this journal. 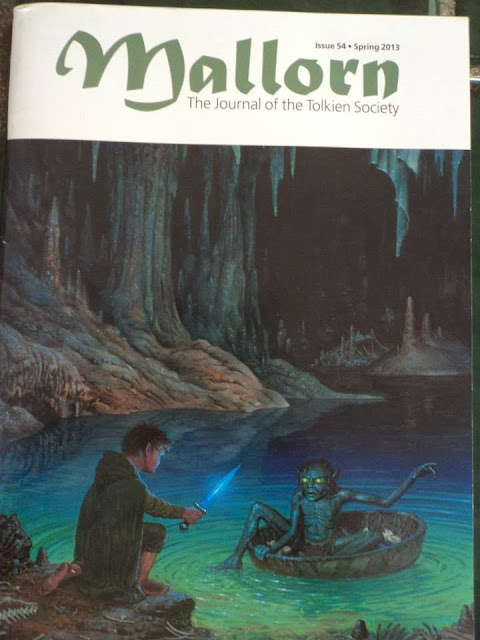 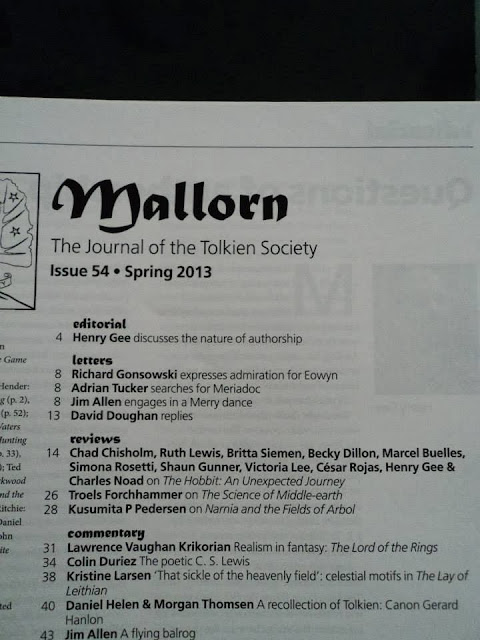 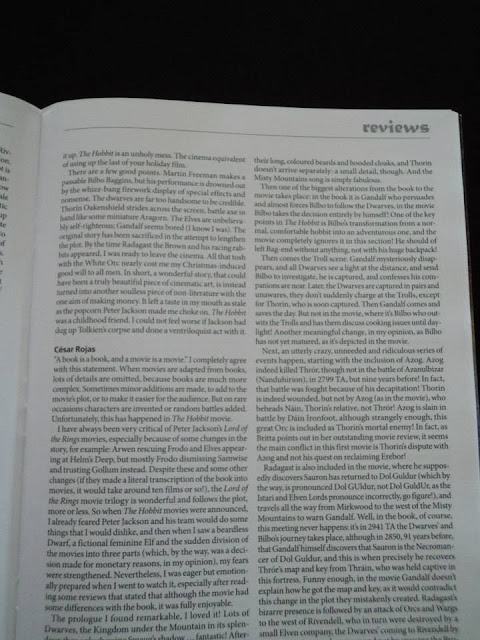 Quenya words existing in other languages

Hasn't it ever happened to you, that when you come upon certain Quenya words, you realize the same word exists in your language, or in a language you are familiar with? It has happened several times to me, so I decided to take Helge Fauskanger's Quenya-English Wordlist and go word by word to find out which words have a meaning (not necessarily the same one, mostly not) in languages I am familiar with.

I found many words existing mostly in Spanish, Portuguese, Italian, Catalan and Latin, languages I have some knowledge of. Thanks to Milla Leskinen, who helped me by identifying  words in Quenya that exist in Finnish, to Celebrinthal for identifying words in Polish, Japanese and German, among others, to Metaflora for Hungarian words, to Emma Flacking, for Swedish and Norwegian, to John Karpo for Greek and to Kastytis Zubovas for Lithuanian. J. R. R. Tolkien knew Finnish and Latin, so Quenya words existing in these languages probably are not coincidences, whether they have the same meaning or not, but most likely, Professor Tolkien wasn't aware of all the word coincidences we have found. I have not included the matches with the English language, since no doubt Tolkien knew if this Quenya word existed in English. Occasionally I used a dictionary to double-check the word's definitions.

I first list the words in Quenya, followed by language and the meaning it has in it. I hope you enjoy it, and of course, if you read Helge's wordlist and find words in languages not listed here, or words missing, or any corrections you would like to make, please contact me!

Finally, towards the end of the writing of this entry, I found an essay called "Similarities between natural languages and Tolkien's Eldarin", by Roman Rausch, in which you can find, among many other interesting things, a list of matches between Noldorin/Sindarin and Welsh and Irish, and a list of matches in other languages, but in which the meanings are very similar or at least related.

Aldëa noun, what the Númenóreans called the fourth day of the Eldarin six-day week, dedicated to Telperion, the White Tree. Early "Qenya" also has an adjective aldëa "tree-shadowed". Spanish: “village”.

ama adv.? element not glossed, evidently meaning "up" like the prefix am-. Spanish: “he/she loves”. Greek: "when".

anna noun "gift", “a thing handed, brought or sent to a person”, also name of tengwa #23. Feminine name in several languages. Finnish: 2nd person imperative form of "to give".

artë prep. with pron. suffix "beside them”. Spanish, Portuguese and Italian: “art.”

avar noun "recusant, one who refuses to act as advised or commanded". Hungarian: "dead fallen leaves".

cáno noun "commander", usually as the title of a lesser chief, especially one acting as the deputy of one higher in rank. Portuguese: pipe.

circa noun "sickle". Italian and Latin: "around,close to, near".

es unidentified word in the phrase es sorni heruion an! "the Eagles of the Lords are at hand" possibly an assimilated form of en, that may function as a kind of deitic particle here: *"Behold the Eagles...". Spanish: 3rd person present of verb “to be”.

lúmë (1) noun "time". (2) noun "darkness". Portuguese: “fire, light” (it has the opposite meaning in Quenya!) In Romanian apparently it means “World”. Italian: "light".

máma noun "sheep". Word for "mom" in several languages, such as Spanish and Polish.

mína adj. "desiring to start, eager to go", also verb mína- "desire to go in some direction, to wish to go to a place, make for it, have some end in view". Spanish: "a mine". Swedish: 1st person pl. possesive pronoun "my". Polish: "face (as in making a face); a mine (bomb).

minna prep. "to the inside, into". Japanese: "everyone".

mir (1) prep. "to the inside, into". (2) cardinal "one". Archaic word in old Polish, Russian, Czech and others,  meaning "peace" (thanks to Celebrinthal for this one)!

nácë interjection? “it is may be seeming”. Spanish: “is born”.

nosta noun "birth, birthday" (maybe not a valid word in Tolkien’s later Quenya because the meaning of the corresponding verb was changed from "give birth" to "beget"); nosta- vb., variously glossed "beget" or passive “be begotten”; in earlier "Qenya" the gloss was "give birth". Finnish: 2nd person imperative of "to lift".

órava- vb. "to have mercy". Finnish: "squirrel". Also a region in Poland and Slovakia: Orava .

pa prep. "on" with reference to contact of surfaces, especially vertical surface (in the sense in which a picture hangs on a wall. Spanish: diminutive of “father”. Polish: "bye".

par- vb. “learn” (acquire information, not by experience or observation, but by communication, by the instruction, or by written accounts, of others). Spanish: "pair, even". Polish: "couples", genitive form of para.

Rána place-name "the Wayward, the Wanderer", a name of the moon. The Etymologies gives Rana with a short vowel. Spanish: “frog”.

tál (tal-, as in "g.sg. talen"; in LotR-style Quenya this is rather the dative singular) noun "foot". Spanish: “such”.

tenta- vb. “point to, point out; indicate; direct toward, be directed toward”. Portuguese: 3rd person present tense of “to try”.


va prep. "from". Spanish and Portuguese: 3rd person present tense of "to go".


yo conj. “and”. Spanish: nominative case of 1st person personal pronoun "I".

Greetings.
This is my Tolkien-dedicated site. If you want to visit my academic site, you can click here:
https://cesar-rojasbravo.com/